Could It Be Viable to Build Contemporary Kitchens in a Conservatory?

With the cost of a traditional extension growing constantly more and more people are wondering whether it is possible to build contemporary kitchens inside a conservatory.

There are some significant concerns for anyone thinking of doing this. In reality there are no structural difficulties in using uPVC conservatories as kitchens. A good builder will have no problem helping you to do this. 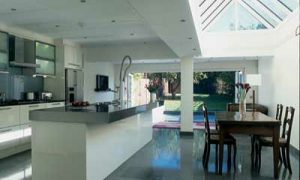 If you are thinking of turning your conservatory into a kitchen though, it is important to be aware that as far as building regulations go it will no longer be a conservatory.

Having kitchen appliances in your conservatory mean that it must just be classed as a normal extension.

This isn’t to say that it isn’t worth exploring.

For a start, a conservatory is much cheaper than a normal extension. Look around the internet and you will see some really stylish contemporary kitchens which have been built in a conservatory. So it is still a viable idea, but I have a suggestion which I think is even better!

Why not dodge most of the problems associated with the building regulations by keeping the key kitchen appliances in the room that you have previously used as the kitchen? Your conservatory can create a huge amount more space for your open plan kitchen, but you will avoid a lot of headaches if the gas and water remain firmly inside the house.

I am a big fan of the large islands that you see in the middle of a lot of contemporary kitchens. A great idea would be to run this island from the main body of the house out into the conservatory. That gives you both a modern feature and plenty of space.

Of course there are many different ways that you can make sure of all this extra space in your kitchen. There are many people that like to eat in their kitchen and extra space allows you to create a stylish kitchen dining room.

Keep the separating patio doors between the house and the conservatory constantly open and create a gorgeous dining area in your conservatory and you can have the best of both worlds. This also opens the possibility of using your old dining room in a number of different ways.

There are loads of benefits to having a glass or uPVC section to your kitchen. Modern kitchen styles encourage a sparse and minimalist style which glass suits perfectly, it also creates a feeling of extra space. Many people love conservatories as they give the illusion of being outdoors without actually being out there, very appealing in the UK!

Whether you are planning a BBQ, a dinner party or a party this will also be a fantastic space for entertaining guests. Kitchens often seem to attract a crowd at parties but you can expect to see that crowd grow with a kitchen like this. See more at Kitchen Conservatory Prices 2020

The Value of Kitchens in a Conservatory